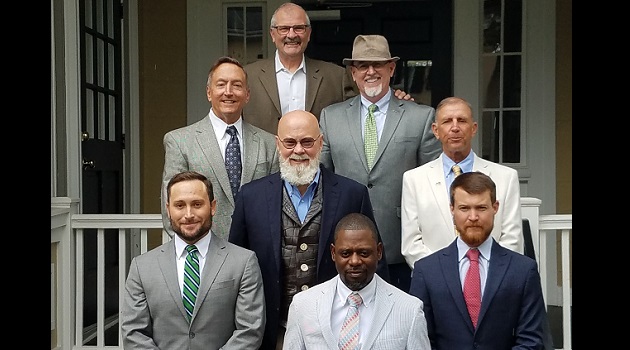 S.C. Black Belt Hall of Fame inductees from Columbia participate in a ceremony

Global Eco Adventures (GEA) honored three of their expedition project leaders and a Missouri-based military writer with the title, IRONMAN, during ceremonies at the Mullikin Law Firm complex in Camden, S.C., Thurs. Sept. 16: The presentations attended by previously awarded IRONMEN, most of whom are members of the S.C. Black Belt Hall of Fame (SCBBHOF).

“These men represent the best of the best,” said SCBBHOF inductee Bruce Brutschy of Columbia, who received the IRONMAN award last month. “Three of the four are SCUBA divers and diving instructors, mountaineering experts, and international expedition leaders; and all four are former athletes.”

THOMAS MULLIKIN, JR., a senior GEA projects leader, has climbed four of the world’s seven great summits and numerous mountain ranges on every continent worldwide including the highest summit on Earth, as well as having logged SCUBA dives in oceans and seas around the globe (including shark diving). A former S.C. State Guard officer, he also holds a Black Belt in Karate and he has served as a Karate instructor.

DEWAYNE GARY, a GEA projects team leader, has helped facilitate and lead mountaineering expeditions both overseas and across S.C. He is an accomplished SCUBA diver (including shark diving).

BRANT TOMLINSON, GEA boardmember, is an accomplished athlete – state wrestling champion at Camden High School and a former member of the Spartanburg Methodist College wrestling team. He has helped lead mountaineering expeditions both overseas and across S.C. He is an accomplished SCUBA diver (including shark diving).

CHRIS CARTER is a Missouri-based military writer and online magazine publisher who has written and published countless articles related to GEA and the S.C. Floodwater Commission. He is a S.C. State Guard warrant officer (inactive reserve), a U.S. Air Force veteran, and a 20-year firefighter who played on the national-champion rugby team, Kohlfeld Scorpions. He also played wide receiver for the Southeast Missouri Copperheads, a semiprofessional football team in the Central Plains Football League.

The group citation for the four new IRONMEN was read by Col. (Ret.) Steve Vitali of Columbia, also an IRONMAN and a SCBBHOF inductee, with the individual awards presented by the senior Mullikin, also a SCBBHOF inductee.

“This means so much to me, perhaps because my son is now one of this very elite group of men, having nothing to do with me,” said Mullikin. “I had nothing to do with this recognition, and that was deliberate. This is a singular honor he deservedly earned himself and for which he was recognized by others.”

GEA is a non-profit adventure-education organization that directs large environmental projects and outfits and leads exploratory expeditions to some of the most isolated regions around the world.