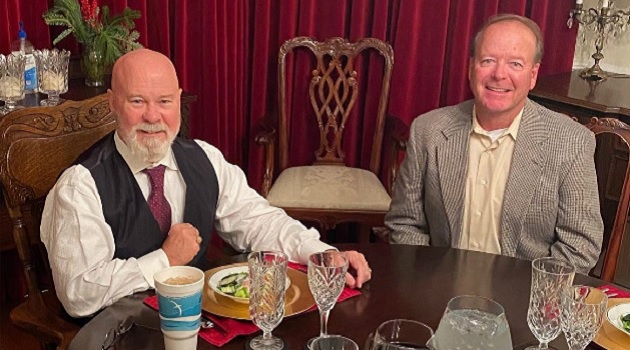 Hite will also participate in a meet-and-greet autograph-signing party hosted by Mullikin’s Global Eco Adventures at a date, time, and place to be determined in late January 2021.

“We are honored to have world champion fisherman and ESPN Commentator Davy Hite as part of our team,” said Mullikin. “Like so many other top-billed ‘superstars’ in their respective fields, Hite joined us for last year’s SC7 expedition because he loves this state – his home in fact – like all of us.”

Hite met with Mullikin at the offices of the Camden-based Mullikin Law Firm, December 16 where the two and other members of Mullikin’s team discussed SC7 2021 and Hite’s autograph-signing event next month.

“We will also present Davy with our Global Eco Adventures IRONMAN award in January, likely on the day of our signing event,” said Mullikin. “He is after all an Ironman in the truest sense, and champion for the Palmetto State and for what we are doing to create greater awareness of and for South Carolina.”

Conceived and led by Mullikin, last summer’s month-long SC7 expedition which began in the upstate wound down through Columbia and the midlands, and concluded in the lowcountry, was the first of its kind across the state with a three-fold objective of exploring the seven natural wonders of the state, showcasing the unique natural beauty of the Palmetto State, and raising awareness of environmental threats from disastrous storms and flooding to the most vulnerable areas of the state.

SC7 2020 was a first for the state, but hardly a first for Mullikin, who’s led expeditions across the globe, having climbed mountain ranges on every continent, including reaching the summits of four of the world’s seven great summits, logging SCUBA dives in all oceans, and parachuting with numerous foreign military airborne forces.

Accompanying Mullikin for multi-mile portions of the SC7 2020 expedition in 90-plus degree heat were Lieutenant Governor Pamela Evette; state senators and representatives,; members of the U.S. Army Special Forces, Army Ranger, Marine Infantry, and law enforcement communities; and many others and Hite.

“The combination of personal interest, public enthusiasm, and the unique sport-fishing connection Davy brings to this effort is immeasurable,” said Mullikin.

Having won a string of Bassmaster victories including the coveted Fishing League Worldwide Forrest Wood Cup over many seasons, Hite is a member of the Bass Fishing Hall of Fame.

Photo: Davy Hite (right) met with Tom Mullikin (left) at the offices of the Camden-based Mullikin Law Firm, December 16 where the two and members of Mullikin’s team discussed SC7 2021 and Hite’s autograph-signing event next month.