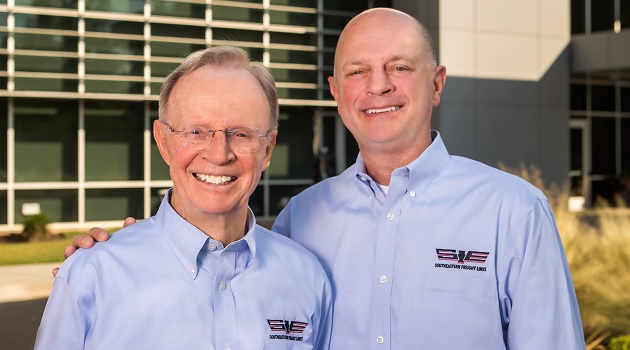 The Cassels family, founders of Southeastern Freight Lines have been named Columbia Chamber’s 2019 Ambassador of the Year.

The Ambassador of the Year Award, sponsored by Colonial Life, is presented to a member of the community who exemplifies outstanding business ethics and has influenced positive promotion and preservation of the greater Midlands.

“The Annual Gala allows the Chamber to recognize individuals who make a positive impact in the business and local community,” said Carl Blackstone, Columbia Chamber President and CEO. “The influence of Bill and Tobin Cassels on businesses in our area and beyond is extraordinary. They recognize the importance of being good public servants and give back to the community generously and selflessly. The Cassels make sure that they, personally and through their business, are fully vested in the community.”

Southeastern Freight Lines, the 10th largest LTL (less than truckload) carrier in the nation, is a family-owned business that has been in operating for more than six decades. It was founded by W.T. Cassels in 1950 with the belief that “If you take care of people, they take care of your customers, and that will take care of your future.”

Today, his son, Bill, and grandson, Tobin, chairman and president respectively, run the business with the same philosophy. Southeastern has grown to locations in 13 states with 89 service centers, 10,000+ pieces of equipment, and 8,600 employees. In its 69-year history, Southeastern has never had a layoff.

Southeastern Freight Lines’ success is evidenced by the more than 390 quality awards it has received from customers and trade associations. A few of those include Home Depot’s 2018 LTL/Carpet Carrier of the Year Award and Lowe’s 2018 LTL Carrier of the Year Award. At the heart of the business is the family’s commitment to its people and the company’s dedication to service quality and a continuous measurable improvement process.

“Colonial Life is proud to honor the Cassels family with this year’s Ambassador of the Year Award,” Colonial Life President and CEO Tim Arnold said. “Bill and Tobin have played numerous roles in bettering our community to make positive changes that last.”

For more information about the gala contact Ashleigh Pair Conner, 803-733-1138. To become a partner or learn more about the Chamber visit www.ColumbiaChamber.com.