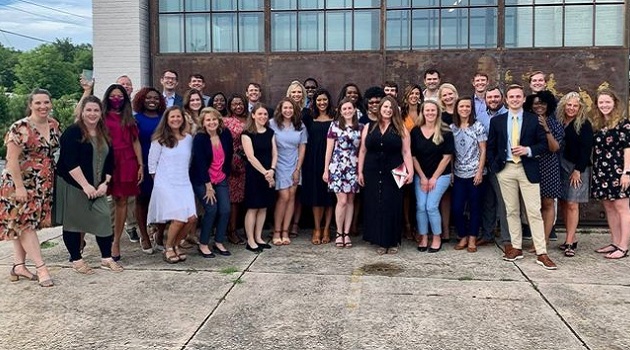 The Class of 2021 completed an orientation, a retreat, ten class days and a class project with the Midlands Fatherhood Coalition. Since its inception in 1972, Leadership Columbia has graduated more than 2,000 leaders across the Midlands.

“For the past 48 years, Leadership Columbia has consistently provided the Midlands with dynamic leaders who are passionate about inspiring change in the community,” said Carl Blackstone, President and CEO of the Columbia Chamber, “The project the Class of 2021 has completed for the Midlands Fatherhood Coalition will serve as a welcoming space for local fathers and their children for years to come.”

In addition to presenting each graduate with a commemorative plaque, the Columbia Chamber and Leadership Columbia Advisory Board honored Megan Newbold, Garvin Design Group, with the Glenn Jacobus Award, an award given each year to a class member who has demonstrated outstanding commitment to the class project and truly embodies the role of a servant leader.

2021-07-13
Previous Post: Pamela Bynoe-Reed selected for 2021 Women in Business Award
Next Post: What to do if your business is selected for an audit