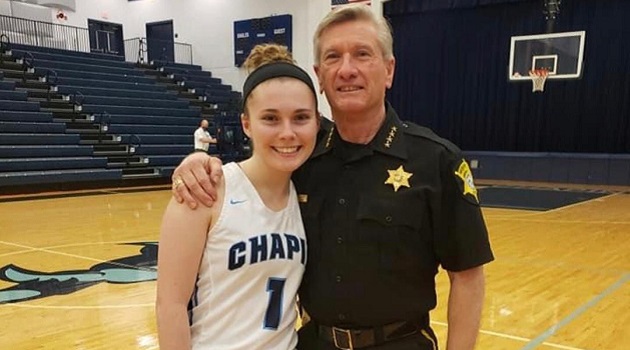 McKenzie Lott, a 5’3” guard from Chapin High School and the youngest daughter of Richland County Sheriff Leon Lott, has signed with the University of South Carolina-Aiken women’s basketball team and is poised to begin working-out with the PACERs this summer.

A standout point guard and shooting guard at Chapin – having played varsity basketball all four years and serving as captain during her junior and senior seasons – Lott is the recipient of numerous high school basketball honors. Those honors include selection to the All-Region 5A team (for both her junior and senior seasons) as well as being selected one of the top 24 junior girls in the South Carolina Hoops Festival Junior Showcase, and being named to the Lexington County ALL-COUNTY Basketball Team for girls high school basketball in March 2020.

“McKenzie is the type of player that can bring a whole team together,” said Chapin Softball Head Coach Calvin Sayger during a midseason interview in 2020. “Her teammates can’t help but to gravitate towards her. The energy she plays with and her competitiveness are characteristics you look for in a player. On the softball field, she is the glue that holds us together.”

That has played over into basketball.

“I totally agree with Coach Sayger about McKenzie being the glue that holds the team together,” said Chapin Girls Basketball Head Coach Jacob Coltrane. “She truly leads in a unique way. She knows how to get her teammates to follow her lead. And once she gets going – and gets the team going – everything is set from there.”

No surprise that PACER’s head women’s basketball coach Mark Miller is every bit as eager to have Lott on the court as Lott is to begin practice with the team. “McKenzie is a versatile guard who knows how the game should be played,” Miller said in a recent signing-day article published by USC-Aiken Athletics. “McKenzie can do a little bit of everything on the offensive end of the floor. She is another player who will work hard and bring enthusiasm to our team.”

Sports are not Lott’s only pursuits or passions. A member of the National Honor Society, Lott plans to major in special education at USC-Aiken. “I’ve worked with children with disabilities throughout my life,” she said. “I want to form special relationships with them to help them go through life.”

Lott’s trek to USC-Aiken is fairly linear. First, her dad – Sheriff Lott – played football and baseball in high school, and then baseball in college at USC-Aiken where he was a pitcher and second baseman during the 1972 and ’73 seasons.

Fast forward to 2020. “I was contacted by Coach Miller through twitter about a visit,” said the younger Lott. “I visited the campus two weeks later with my parents and fell in love. A week later, I verbally committed to USC-Aiken.”

On Veterans Day of last year, Lott signed her national letter of intent to play basketball at USC-Aiken.

Lott credits her athletic and academic success thus far to a veritable network of coaches, teachers, and family members. Most of all? “Dad has pushed me to be the best person and player I can be. He has taught me the true meaning of hard work and of never giving up,” she said.