By: John
In: Fishing 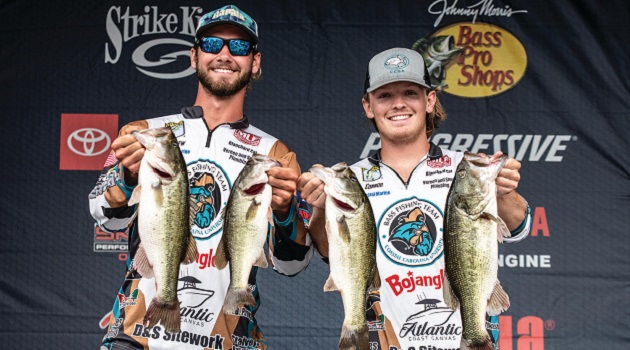 Connor Cartmell of Chapin and Andrew Vereen of Murrells Inlet brought home the grand prize of $5,000 at the 2022 Strike King Bassmaster College Series National Championship on Sunday, September 4th held in Winyah Bay in Georgetown, SC. With a three-day total of 40 pounds, 2 ounces, and home waters for Vereen, he and Cartmell earned the National Championship victory.

“We have traveled so far to get to this point,” Cartmell said. “People thought we were crazy driving to Michigan, to Arkansas and even to Lake Norman.”

During the tournament Vereen and Cartmell focused their efforts way up the Santee River, a very shallow part of the river with a current that flows from the dam at Lake Marion that only got shallower as the tide receded. “The bigger bites we had were in 3 feet of water, including our biggest fish, and some were in 6 or 7 feet of water,” said Vereen.

Cartmell and Vereen have now secured their spot in the College Classic Bracket. The Top 3 teams from the National Championship will compete in the Bracket with date and location to be announced soon.