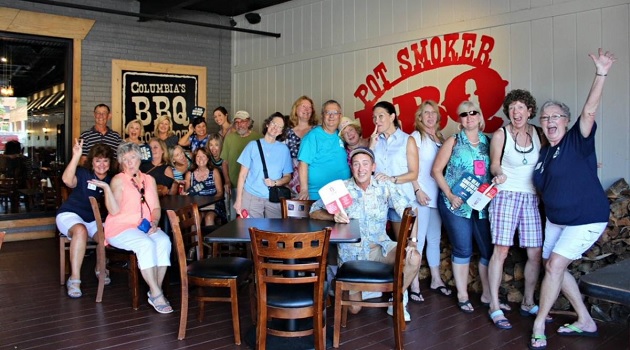 In the central part of the Palmetto State, convenient to Interstates I-77, I-20 and I-26,
Capital City/Lake Murray Country has always been known for big-city attractions, small-town discoveries and water adventures. Now, adding to the list of reasons to visit, trends show that the area is attracting food travelers planning their own food trail for culinary adventure, from Southern to global flavors.

One dining mecca is Lexington, an up-and-coming town near Lake Murray that draws visitors in with its historic charm and the new and well-loved restaurants lining its historic streets. Two of the area’s chefs, Chef Jon Cooper of Alodia’s Cucina Italiana and Arif Rizvi of RF’s Corner Grill, were part of “Team Lake Murray” restaurant chefs who represented South Carolina against the world’s best at the 2021 World Food Championships’ Ultimate Food Fight in Dallas, Texas.

Experience your own version of the World Food Championships with these can’t-miss Capital City/Lake Murray Country dining destinations:

Alodia’s Cucina Italiana: Step back in time to Old Italy, with a menu featuring Chef Jon Cooper’s family recipes, where homemade sauces and Abruzzo pastas lay the rich and flavorful foundation. Try Bowtie Gratinate–a pasta with sautéed shrimp and rendered pancetta, in a creamy sauce, topped with Parmesan and then baked. Cut into the Duck Arrosta, a pan-roasted duck breast served over a blackberry noir sauce with a side of Asiago, mushroom and pancetta risotto. The menu also includes the classics–lasagna, manicotti and eggplant parmesan (101 West Main Street, Lexington, South Carolina 29072; (803) 520-4493; Also in Irmo: 2736 North Lake Drive, Columbia, South Carolina 29212; (803) 781-9814).

Not sure where to start? Rely on the experts: 2 Gals & A Fork Food Tours. Historic Columbia trained tour guides share notable anecdotes from the Capital City while indulging guests in tastings from five of the 60 area restaurants. The Vista Tour includes the revitalized downtown district’s history, as well as a variety of notable restaurants, including The Blue Marlin, Liberty Taproom, Pearlz Oyster Bar, Hickory Tavern, Kaminsky’s and more. Tours are available in nearby Newberry and in Lexington.

If you’re in Columbia on a Saturday, you’re in for a treat at Soda City, Columbia’s Main Street market. This bustling rain or shine event offers a variety of internationally inspired cuisines. Sample everything from Columbian arepas, Belgian waffles, empanadas and gourmet doughnuts to local barbecue. Hydrate with a healthy and colorful beverage at the juice bar or sip on local craft brew suds. While you’re there, peruse fresh produce, meats and creative wares from local artisans.

For more details on places to stay, where to eat and all there is to do in Capital City/Lake Murray Country, go to LakeMurrayCountry.com

2022-01-25
Previous Post: Airplane goes down in Lake Murray
Next Post: Kinetic Derby Day practice is Feb. 5, in anticipation of the big event, April 23 – Still time to register to race