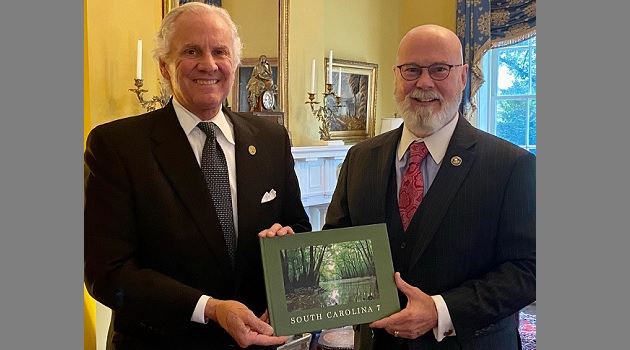 South Carolina 7, a new book chronicling and commemorating the month-long SC7 cross-state expedition in July 2020, was published last month, a copy of which was presented to Gov. Henry McMaster by expedition leader Tom Mullikin, October 23.

“This is a beautiful coffee table book which tells the story of our summer trek from the mountains to the sea through the work of so many of the great photographers who accompanied us along the way,” said Mullikin, who conceived, planned, and led the SC7 expedition. “The layout and the overall design in this hardcover photographic essay from start to finish is the perfect way in which we have been able to document our journey: This and our forthcoming documentary film.”

“I think what Tom wanted was a book of memories for this – the inaugural SC7 expedition – and that is exactly what we have achieved here,” said McCollum, who hiked much of the trek and is one of the book’s contributing photographers. “The book showcases the people, places, and partners who made this happen.”

An energy-environmental attorney and university professor, Mullikin is a former U.S. Army officer and retired two-star commanding general of the S.C. State Guard who today serves as chairman of the gubernatorially established S.C. Floodwater Commission. He has spent much of the last four decades traversing, navigating, and climbing mountains on every continent on earth (including reaching the summits of more than 20 mountains across the globe) and he has logged SCUBA dives in all the world’s oceans, including ice dives in the Arctic and Antarctic Oceans.

The SC7 expedition was hardly a new venture for Mullikin.

“Tom Mullikin is one of South Carolina’s uniquely talented citizens who serves as a great ambassador of our state,” said S.C. Gov. Henry McMaster, who appointed Mullikin chair of the S.C. Floodwater Commission in 2018. “That he [Mullikin] is both qualified and willing to take on such an expedition to highlight our state’s natural beauty and wonder is something that brings great pride to the Palmetto State.”

The first leg of the SC7 expedition – which closely paralleled the 500-mile Palmetto Trail – began in the Upstate on July 1 with a two-fold goal of first enhancing appreciation, worldwide, for what S.C. offers in terms of natural beauty and the pristine and proximate excursion destinations whether by hiking, kayaking, or climbing. The second goal was to raise greater public awareness of environmental threats (resulting from disastrous storms, flooding) to the most vulnerable areas of the state. The expedition concluded at the South Carolina Aquarium in Charleston, July 30.