Actress Comes Out of Retirement to Fund Flood Damage 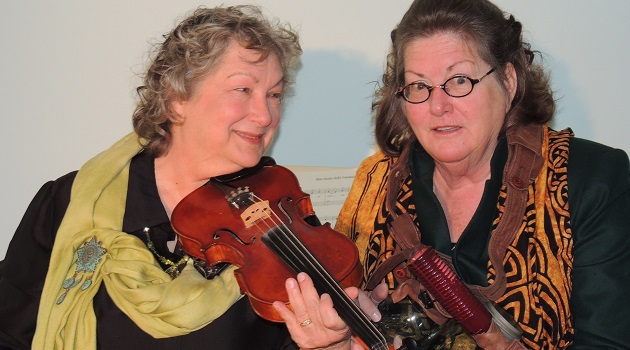 Kate Brighton, professional actress, director  playwright has come out of retirement to bring to The Harbison Theatre, a production filled with Irish music, internationally ranked Irish dancers and masterful storytelling with: “Catherine & Katharine; Sisters Wee Bit Irish night only, Thursday, March 7th. Kate Brighton storyteller on Ball Mason Jars (An instrument she invented), with her true sister Cathy  on fiddle, join with actress/dancers Grace Condon and Carolina Murray to weave this theatrical production with tales of growing up in Ballymore Eustace, Ireland in the  and 60’s when threats of entering the nunnery collided with the Beatles. A  theatrical night of music, dance, laughter and masterfully dramatic .

“Catherine & Katharine; Sisters Wee Bit Irish”; explores growing up in a large Catholic family in a small Irish village around the time of the first Beatles concert in Dublin, November 7, 1963. Life changes as the lovely motorcycle boy, Hugh Darcy motors into Catherine’s life. The cast is filled out with two Irish step dancers representing the younger O’Sullivan sisters.

Kate’s reason for coming out of retirement: Flood Damage! “My home was hit pretty hard in the floods of 2015. I received help thankfully from my insurance and FEMA, but because of the flood rules they could not complete the job and I have struggled to get the work done to my collapsing foundation. I got several quotes to fix the problem that leaves me seeing light and feeling wind blowing into my house from where the walls meet the foundation, but there is no way I can come up with thirteen thousand dollars.” “So” she said enthusiastically, “I thought why not “Our Gang it’, put on a show!”

Cathy on Irish fiddle, Kate’s true sister, moved to SC and has joined Kate after living and entertaining in Denver, Colorado and Portland, Oregon. Kate Brighton is the Director of the Absolute Theatre Company and has lived and worked between Asheville area, NC and Columbia for the last twenty years as well as taking on projects in faraway places as L.A., the
Umatilla Indian Reservation, Pendleton Oregon and Portsmouth, England. She has been a narrator with both the Oregon Inland Orchestra and the Portsmouth New Music Orchestra, and a comedian on “Roller Skates!” at Universal Studios in Orlando. Her acting credits include national commercials, TV specials and playing a British Biblical Archeologist.

Carolina Murray a competitive Irish dancer, age 12 is a straight A student at Lexington District 2 middle school. Carolina recently placed 4 th in southern regional’s and qualified to attend the International Championships of Irish dance in 2019. She plays Kate’s younger self.

At twelve Grace Condon started Irish dance with Pamela Pierce and Sandra Connick at Connick School of Irish Dance in Charlotte, NC and at a satellite location in Lexington. Grace, now a freshman at USC is an outstanding competitive dancer who has traveled to Ireland, Scotland, England and even Mexico to compete internationally! This past year she placed second in the region, 13th in the nation, and 51st in the world. Grace has qualified for the World Championships 3 times this past year alone! She has placed 20th at the British International competition, and 28th at the Irish International competition! Grace will play the younger Catherine O’Sullivan.

Tickets are $22 with senior and military discounts at $20. Tickets can be purchased online here: harbisontheare.org or at the box office. This show is recommended for those 14 an above.

2019-02-12
Previous Post: Let’s recognize those who give of themselves to make a difference
Next Post: Guardian ad Litem programs needs volunteers