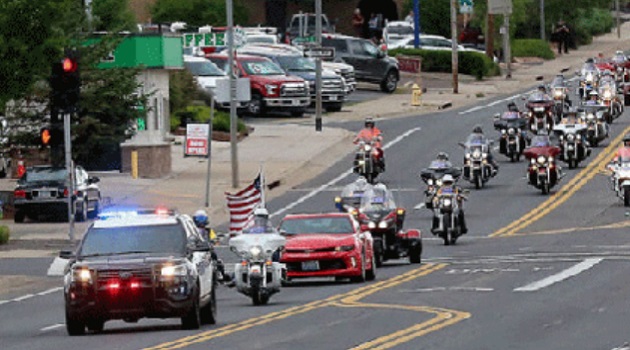 The Nation of Patriots’ 12th Annual Patriot Tour for Veterans will host a flag transfer ceremony in Irmo this Saturday, June 19.

One flag bearer will receive the American Flag in the transfer ceremony at 2 pm at Harley Haven as part of the nationwide, city-to-city 14,500-mile, 115-day Patriot Tour.

Riders will depart from Irmo on June 20 at 8 am to relay the flag to Conyers, Georgia. Preceding arrival in South Carolina, the flag has traveled through 14 states, beginning May 14 in Nevada. Transported by air to Hawaii and Alaska, the flag and the Patriot Tour for Veterans will return to Nevada September 11, for the first time in its history having journeyed through all 50 states, officials confirmed.

The Nation of Patriots is an all-volunteer-powered nonprofit organization that honors those who protect American freedom by uniting Americans under the U.S. flag, said Bill Sherer, the Nation of Patriots’ founder and executive director. The Patriot Tour for Veterans is the organization’s primary fundraiser and 100 percent of its proceeds are donated to veterans in need as identified by Veterans Administration facilities and other veterans organizations across the country.

Sherer said the Nation of Patriots serves an important mission by uniting the country to help veterans.

“It is critical that we see our mission through. Our administrative costs are covered by corporate sponsorship, so every dollar we raise goes directly to American veterans and their families,” Sherer said. “Nation of Patriots is dedicated to honoring our unique American freedom and those who defend it.”

Nearly $1.5 million has been raised through this grassroots effort since the Nation of Patriots’ inception in 2009.

“2021 presents a special opportunity for Nation of Patriots. I am excited to see how much we can raise in our 12th Patriot Tour, especially as we emerge from the Covid-19 pandemic when veterans like so many others, are in dire need,” Sherer said. “We’re pushing all of our teams to make this an incredibly successful year.”

Nation of Patriots was founded by Sherer in Milwaukee in 2009. He was inspired to take action after witnessing the hardships his friends endured upon returning to the U.S. from active duty on foreign soil. Nation of Patriots works nationally to financially support and increase awareness of the physical, emotional and economic adversity that disabled veterans and their families live with today and every day.

The Patriot Tour for Veterans’ flag has flown over the White House, on the USS Independence Aircraft Carrier, in an F-16 fighter jet over the Nevada desert and on the motorcycles of more than 1000 flag bearers with escort riders numbering in the hundreds of thousands.
To learn more about the Nation of Patriots visit www.nationofpatriots.org.