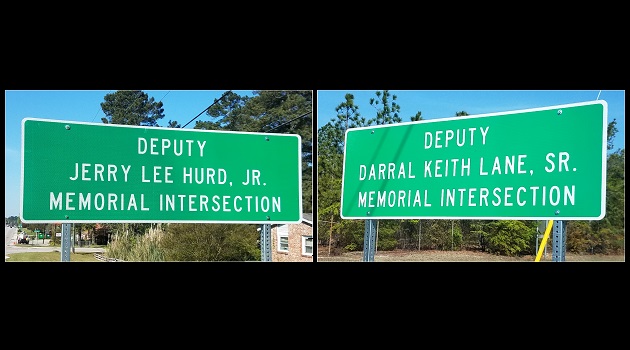 TWO NEW MEMORIAL HIGHWAY SIGNS were erected and unveiled in Richland County earlier this month: One on Percival Road near the I-77 interchange and Decker Boulevard; the other on Cushman Drive and Baldwin Road just off Two Notch Road. Both signs are memorializing two fallen deputies – Jerry Lee Hurd, Jr. and Darral Keith Lane, Sr. – with the Richland County Sheriff’s Department (RCSD).

The Percival Road sign honors Deputy Hurd, who in 2018 succumbed to injuries he sustained in the line-of-duty 16 years earlier. On Memorial Day 2002, Hurd was struck by an oncoming car as he was crossing the road while working as a prisoner transport officer for RCSD. Subsequently paralyzed, he underwent several surgeries over an extended period of time, ultimately losing both of his legs.

In time, Hurd returned to RCSD duty as a member of Victims’ Services. But because of complications stemming from the accident, he was readmitted to the hospital in early 2017. He passed away, Nov. 7, 2018, as a result of those injuries.

The Cushman Road sign honors Deputy Lane, a U.S. Army veteran, who collapsed after a December 14, 2007 vehicle chase, foot-pursuit, and brief struggle with two of three suspects, one of whom he managed to handcuff before collapsing. Lane was later pronounced dead of a heart attack.

“Both deputies were and are worthy and deserving of these separate lofty recognitions,” said Richland County Sheriff Leon Lott, adding, “The South Carolina General Assembly had to approve the memorial signs with a proclamation directing that the S.C. Highway Department erect the signs.”

According to Lott, he first approached S.C. Representative Seth Rose, an attorney and former Richland County councilman, with the idea. Rose began the legislative process along with the Richland County legislative delegation. “Seth got the ball rolling,” said Lott. Then Lott and Rose together presented the stories of Hurd and Lane to Senator Mia McLeod (representing the district wherein Hurd was struck in 2002) and Senator Darrell Jackson (representing the district where Lane collapsed while in action in 2007).

“The approval process is exacting and meticulous,” said Lott. “The honorees – today reserved almost exclusively for those who are deceased – along with the stories of why they are being so-honored are thoroughly vetted and investigated. This is for their families.”

Lott added: “Both of these officers sacrificed their lives in the line-of-duty for the citizens of Richland County. So it was only appropriate that we name the areas where they lost their lives.”

Hurd’s and Lane’s deaths were not in vain.

“Both deputies are deeply missed by those of us who knew them,” said Lott. “They are not forgotten; never will be. And the loss of both has had a direct and permanent impact on our department. Deputy Hurd, for instance, is the reason all of our deputies today have and wear reflective vests on the roads where we patrol and otherwise operate. Deputy Lane is the reason all of our deputies have mandatory annual physicals with a heart screening as part of that physical.”

Both memorial signs were unveiled to the public with family present on Friday, April 8, 2022.