By: John
In: Awards, Community News 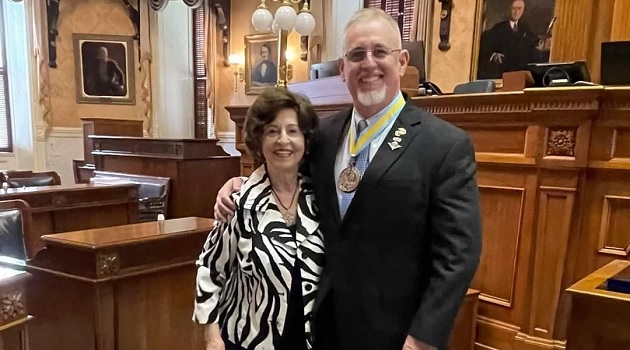 Smith was presented the award by Senator Thomas Alexander, president of the S.C. Senate, and Col. (Ret.) William M. “Bill” Connor, U.S. Army, during a ceremony at the South Carolina State House on May, 25. Connor nominated Smith for the award earlier this year.

“I’ve known Tom and his work for many years,” said Connor. “His initial service as a Marine Infantry leader and follow-on work as a military writer embedded with U.S. and British forces during the Iraq war as well as service as director of the S.C. Military Department’s [SCMD] first-ever counterterrorism task force and so much more made him a stellar candidate for this lofty recognition. The NIA board chose wisely.”

The Order of St. Maurice is awarded at one of five levels: The highest level is Primicerius, followed by Centurion, then Legionnaire, Peregrinus (for distinguished foreign military personnel), and Civis.

“I’m again reminded of James, the brother of Christ, who said, ‘Every good thing given and every perfect gift is from above,’” said Smith. “To be the recipient of this award is huge, from above, and certainly humbling. To receive it at the penultimate Centurion level makes it even more personally rewarding.”

Smith added: “I think the award and the level it was granted actually speaks less about me and more to the National Infantry Association’s respect for the nominator Col. Bill Connor, a highly decorated Army infantry officer and former senior U.S. military advisor in Helmand Province, Afghanistan, who a few years ago received the Order of St. Maurice also at the Centurion level.”

A former U.S. Marine Corps Infantry leader, counterterrorism instructor, SWAT team officer in the nuclear industry, and a retired SCMD officer (retiring at the rank of colonel); Smith is a professional writer, a New York Times bestselling editor and an internationally acclaimed military technical consultant. A veteran war correspondent, Smith has covered conflict in the Balkans and across much of the Middle East, including traveling twice to Iraq during the war.

In late 2018, Smith was named to the National Security Task Force of the gubernatorially established S.C. Floodwater Commission.

Smith’s service began in the U.S. Marine Corps as a rifle scout (Marine infantryman) serving as a special-weapons security and counterterrorism instructor – personally training Marines and sailors ashore and aboard ship. Following sea duty, he served as a rifle squad (infantry) leader with 1st Battalion, 5th Marines, the most decorated regiment in the Corps of the also elite 1st Marine Division.

Smith is a graduate of infantry, airborne, mountain warfare, amphibious raid, and sea schools, and he received advanced training in close-quarters-combat by the FBI and the U.S. Secret Service. Among his many awards and decorations, Smith is a recipient of the Navy and Marine Corps Achievement Medal for his leadership in both nuclear security operations and counterterrorism training. He holds the title “Honorary Ranger” in the South Korean Marine Corps, and he was named “Honorary Green Beret” by the Army Special Forces Association.

As a war correspondent and military analyst, Smith has reported from battlefields not only throughout Eastern Europe and the Middle East, but he covered the immediate aftermath of the 9/11 attacks from “ground zero” in New York. He has written extensively about the global war on terror with a focus on international terrorism and counterterrorism, seaborne piracy, amphibious warfare, special operations, and ground combat.

Smith is the recipient of two S.C. Senate commendations, a U.S. Army North commendation, the Global Eco Adventures IRONMAN award, the Richland County Sheriff’s Department’s 2018 Civilian of the Year award, and the Order of the Palmetto, S.C.’s highest award presented by Governor Henry McMaster in 2019.

Smith is also a special deputy with the Richland County Sheriff’s Department (RCSD), working directly with the sheriff as well as the office of public information on special projects and as director of RCSD’s Elder Abuse Awareness Team.

The Order of St. Maurice is named for Saint Maurice, legendary commander of the Theban Legion of the Roman Army in the 3rd century A.D.