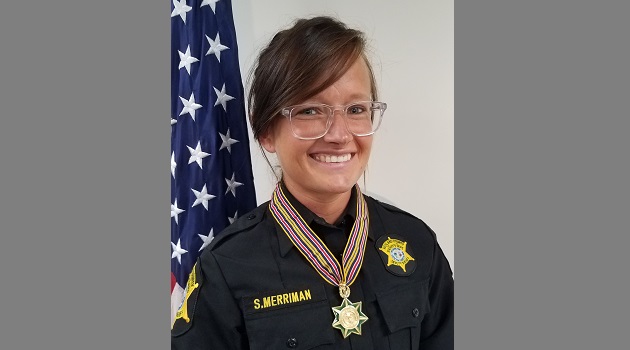 Richland County Sheriff’s Department (RCSD) Deputy Sarah Merriman received the United States Attorney General’s DISTINGUISHED SERVICE IN COMMUNITY POLICING award during ceremonies at the U.S. Attorney’s Office for the District of South Carolina, Thursday, April 21. As such, Merriman is the first law enforcement officer from the Palmetto State to be so honored.

Awarded by Attorney General Merrick B. Garland and presented by U.S. Attorney (District of S.C.) Corey F. Ellis, the award was one of 18 presented to law enforcement officers from 12 police departments and sheriff’s offices nationwide.

“The Attorney General’s Distinguished Service in Community Policing recognizes state, local, tribal, and territorial police officers, deputies, and troopers for outstanding efforts in innovative community policing strategies, criminal investigations, and field operations that have proven effective in enforcing our laws,” said Garland’s letter [read aloud by Ellis] accompanying the award. “Through this award, we seek to highlight the importance of community policing and the vital public service that our nation’s law enforcement personnel provide.”

Merriman’s award was in the category of field operations.

A portion of her award citation reads: “When Deputy Sarah Merriman was dispatched to a call for a domestic dispute in progress, she was told in advance that the suspect had a firearm and had already assaulted a woman. Upon her arrival outside of the residence, she saw a very agitated man with a shotgun in his hand, and one of several women on the scene was bleeding profusely from her head. Merriman had to decide instantly whether to draw her weapon; recognizing the subject’s state of mind, she chose to talk to him. She pleaded with him to drop the weapon — and once additional patrol deputies arrived and aimed their guns at him, she encouraged him to focus on talking to her. The suspect taunted Merriman for several minutes, yelling at her to pull her weapon and shoot him. Finally, Merriman was able to calm him down and he lowered the shotgun; she then took him into custody.”

The citation added: “Her ability to recognize the individual’s state of mind — and her realization that drawing her weapon would escalate the situation — prevented a tragic outcome and saved at least one life that day.”

“Sarah used the training she had and was able to deescalate a very dangerous situation that night,” Lott said. “To say we’re proud of her is, well, beyond words. Sarah has proven herself to be a very important part of the Richland County Sheriff’s Department. She represents not only the Sheriff’s Department but all of law enforcement across the nation.”

Lott added: “Unfortunately, there are those who in this country who want to write the narrative that those who wear this uniform are looking for an opportunity to take someone’s life. Sarah demonstrated the opposite of that.”

Merriman, who was named DEPUTY OF THE YEAR 2020 (following her receiving RCSD’s Region Four Deputy of the Year honors that same year) and earning the department’s coveted Medal of Valor, is a K-9 handler and a member of RCSD’s elite Special Response (tactical) team.

The Justice Department awards program for law enforcement distinguished service marked its fifth year in 2022. The award presentations are normally held at the Robert F. Kennedy Justice Department Building in Washington, D.C., but were instead moved to the respective state district offices due to COVID protocols.