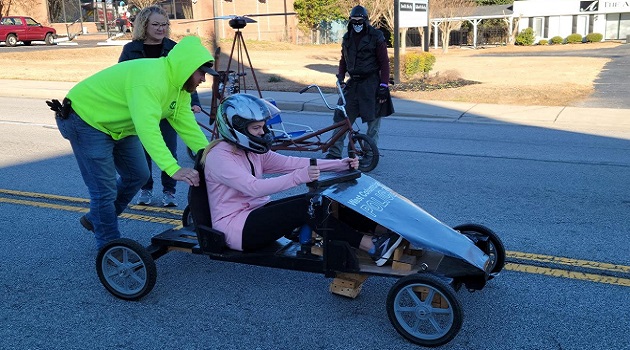 There was a bit of a chill in the air Saturday morning (Feb. 5) as soap box contraptions sped down the hill on Meeting Street in West Columbia.

Part of the street was closed off for a couple hours as the would-be champions were taking test runs for the April 23 Kinetic Derby Day.

“It was a great day for a trial run” said Kelli Ricard, Event Planner for the City of West Columbia. “We love seeing the people come out to enjoy this. And we expect Kinetic Derby Day to be so much fun this year.”

West Columbia Police Chief Marion Boyce was working out the kinks of the WCPD soap box racer. His daughter Kate Boyce was behind the wheel.

“It’s great to be out on such a beautiful morning in West Columbia,” Coleman said.

2022-02-08
Previous Post: College of Charleston graduate-assistant to lead World Ocean Day efforts in S.C. and beyond
Next Post: Final Table Event Coming to the University of South Carolina